It appears Youri Tielemans has reached an agreement with Arsenal over personal terms.

Belgium international is set to join the Gunners if they are able to reach an agreement with Leicester City over the transfer fee but the London giants are yet to launch an official bid for Youri.

They have a long way to go before they can finalise an agreement for Tielemans, who is seeking pastures new after a successful spell at Leicester City.

The 25-year-old midfielder had initially joined the Foxes in early 2019.

During his three-and-a-half-year spell at Leicester City, the Belgian midfielder has racked up 158 competitive games at the King Power Stadium.

His displays in the middle of the park have been critical in helping Leicester City establish themselves as contenders for the UCL berths.

The former Monaco footballer himself has established himself as one of the best midfielders in the PL.

As such, the Belgian has now become a target for several teams around England, with the Gunners among the clubs determined to snap him up ahead of the new campaign.

The Gunners’ agreement with Youri spells bad news for Tottenham, though. The Spurs are among the teams keeping tabs on the Leicester City midfielder.

But having already roped in Bissouma from Brighton, it appears unlikely they would want to spend a fortune on another midfielder.

Another possible suitor for Tielemans are Real Madrid. Arsenal have already roped in Fabio Vieira from Porto this summer.

Youri Tielemans has the ability to score long-range goals with powerful shots which could be a great addition for Arsenal. Tielemans could fill in for departed Elneny.

Tielemans signed a 4 year contract for Leicester City in 2019. His contract is set to expire on the 30th of June 2023, which means he still has one year to spend at the King Power Stadium. 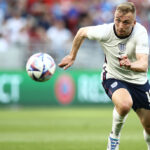