Canada international Jonathan David is on Arsenal transfer list ahead of January transfer.

The likes of Tottenham, Chelsea and Manchester United are now challenging the Gunners for the 22-years-old striker.

Arsenal Chance of signing the Lille striker is in the club hands.

The Canada international is one of the best player in Ligue 1 with his brilliant performance that has earned him 9 goals and 3 assists so far this season.

Reports claim that Jonathan David is open to make a big money move in January if he can break through in Qatar.

The 22-years-old will be with Canada in the World cup and he’s expected to be in his club best form as 4 Premier League clubs are ready to invest in him.

Arsenal, Manchester United, Chelsea and Tottenham are all keeping tabs on the Canadian international.

Arsenal need to extend their club depth to maintain their lead on top of the Premier League table, while Chelsea are looking for players that can bring them back into form.

The blues are 5 games without a win and they will be hoping to break into the Market by January.

Arsenal are ideally looking to add forwards and midfielders, and they might consider singing a new No.9 if Eddie Nketiah’s form does not improve. 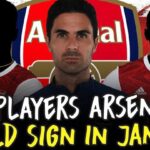 Why Arteta must buy new players in Janua 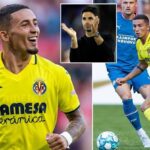