Arsenal begin their season with a victory over Crystal Palace on August 5th before securing their second victory of the season last Saturday against Leicester City all behind the new Captain Martin Odegaard.

According to multiple reports from England, it has been gather that Mikel Arteta has nominated Gabriel Jesus and Granit Xhaka to support Martin Odegaard in guilding the team through the season.

According to The Athletic, Jesus, 25 and Xhaka, 29, will both make up the Squad leadership to support Martin Odegaard captaincy role.

This means, one of Jesus and Xhaka will wear the club armband should Martin Odegaard miss a game or being substituted out.

Gabriel Jesus has been phenomenon for Mikel Arteta’s squad so far this season.

The Brazilian open his goal book in the League on Saturday against Leicester City with two goals and two assist.

The striker was remarkable during pre-season and has since continue the impressive run of form.

The 25-years-old has now netted a total of nine goal for Arsenal since joining from Manchester City this summer.

While Granit Xhaka was formerly the squad captain during manager Unai Emery.

However, the Swiss was stripped off the captaincy after yelling at fans and tell them to f***k off 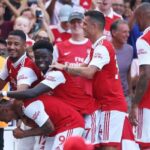 “the mentality we need”,  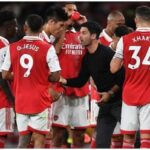