Arsenal manager Mikel Arteta will be looking to get all three points at Selhurst Park against Crystal Palace and will go with his best team.

Mikel Arteta will have that humiliating 3-0 defeat at Selhurst Park in mind when he picks his Arsenal side for Friday night’s Premier League opening clash against Crystal Palace.

The Gunners went into this fixture last season looking to secure Champions League football, but fell to one of their most disappointing defeats of the season under the lights in South London of Selhurst Park

That was the game where the wheels came off for the club’s European push for Champions League as midfielder Thomas Partey picked up a muscle injury which ruled him out of the rest of the season.

Many fans believe that if the Ghanian midfielder was fit, Arsenal’s chances of finishing in the top four would have still been possible.

Going by their form in the Pre-season, Arteta’s side look sharp and are hoping to get their season off to a flyer after laying the foundations in advance.

For the third straight campaign, their first game is a London derby, having played against Fulham two years ago and Brentford last season.

Arteta will know what it means to be catching up, so a good start is what the Spanish manager would be looking for under the lights at Selhurst Park.

Patrick Vieira took four points off him last season, and Arteta would be wary of that and look to stamp his authority and put his club’s recent struggles at the hands of Crystal Palace to bed.

Mikel Arteta has a few key decisions to make – where to play new signing Oleg Zinchenko and whether Gabriel Martinelli and Eddie Nketiah can force their way into his side.

With old debates looking to be reignited and the season that promises to be made or break for the North London giants. 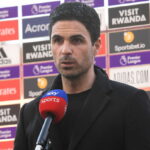