The North London giants were strongly rumoured with a move for Raphinha before the South American forward signed for La Liga giants, Barcelona in a deal worth up to £55m.

The 25-year-old forward was unveiled to fans at the Catalan teams training ground on Friday and scored a stunning goal in pre-season friendly match over Real Madrid.

Raphinha developed into one of Leeds’ key players following his £17m move from Rennes back in 2020,

Raphinha found the back of the net 17 times and providing 12 assists in 65 games and helping the team to avoid relegation from the Premier League last term.

His form attracted interest from a number of teams and Edu admits he spoke to the player’s agent and asked to be kept informed about any developments.

Asked how close the Gunners came to adding Raphinha from Leeds, Edu told Sky Sports: ‘People think we went in too deep about Raphinha, because Raphinha was everywhere.

‘It’s fair we did have some conversations with Deco because Deco is his agent and I have a good relationship [with him] – we are friends.

‘I just said to Deco, “Can you explain to me the situation with Raphinha?” and he was clear,

“Edu, we have a good relationship but I’m not going to lie to you, his dream is  go to Barcelona and I don’t think I can change that”

‘Okay, thank you very much, if something happens then just let me know because I can  understand the situation. If not, no problem and we carry on with our relationship.’

While a move for Brazilian forward failed to materialise, the Gunners have still enjoyed a productive transfer window.

‘I understand sometimes players want to play Champions League football, but I think we can offer something very special for the players as well.

‘It’s not only Champions League, but you can be part of a group of players which can achieve something very special for this football club.

‘I’m sure we will do something very special for this football club and then when I explain to the players, they really understand [it] and that’s why they’re here.’

Arsenal have moved on with their new signings. Gabriel Jesus has proved to be the player Arsenal needed ever since the departure of Thienry Henry.

Gabriel Jesus was yet again the starring man against Chelsea on Sunday after a delightful chipping finish. 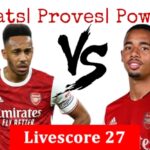