Erling Haaland to Barcelona would be the signing of the century if the Spanish gaint can made this possible.

FC Barcelona has not been their usual self, ever since talisman Lionel Messi left for PSG last summer transfer window on a free transfer.

The club currently finds itself in fourth place, an unusual position for Barcelona. Now many in the club feel they need someone to help the team out of its current situation.

With many suggesting, they have to break the bank to get Dortmund top striker Erling Haaland.

The club President has promised to bring in Erling Haaland this coming transfer window.

Barcelona recently brought in Ferran tores to the team but feels it’s not enough to cover up the void left by their former captain Lionel Messi.

FC Barcelona is working hard to gather the money required to bring Dortmund forward to the team for next season.
Everyone in the club’s management is in support of this move and will do anything to bring the striker to Barcelona.

With Madrid also set to close the Kylian Mbappe deal, the club feels it’s perfect to also bring in Erling Haaland to make the league competitive once again.

3 Reason why Lionel Messi Will returns to FC Barcelona to end his CareerHere is why Lionel Messi and Cristiano Ronaldo names will never erase From the history of football3 Reason Arsenal will make it to next season UEFA Champions League competition.Three (3) things to expect from Mikel Arteta Arsenal’s in 2022 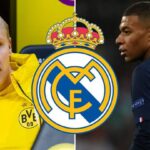