However, a report on latest Arsenal transer updates claim that Arsenal are yet to submit any official offer to Leicester, and Man United and Newcastle are already on the que to acquire the 25-years-old signature.

Youri Tielemans is expected to depart Leicester City this summer with his contract with the Fox set to come to an end in 2023.

In a statement by transfer expert Ben Jacobs, it was stated that Newcastle are also interested in the 25-years-old, and also stressed that Manchester United Boss Erik Ten Hag’s has recently show interest in the deal.

Ben Jacobs on Twitter tweeted: “Youri Tielemans update. Still no formal offers made. Tielemans wants to join Arsenal and Edu still in touch with his agent.

“Arsenal have agreed terms, and worked on the deal for a year, but have never placed an official bid.

“Tielemans was actually a Ralf Rangnick target but didn’t want to join Man Utd under him.

“If Arsenal reach an agreement with Leicester, told Tielemans will sign. But for now, Arsenal haven’t decided on him.

“The genuine interest from Man Utd may force Edu to make a decision quicker than expected, especially if ten Hag pitch proves appealing.”

Follow us for more on Latest Arsenal Transfer Updates.

Here is why Lionel Messi and Cristiano R 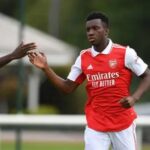