Lionel Messi and Cristiano Ronaldo have been great football rivals for quite a long time now.

The two football legend has done incredible things in football that can’t easily be forgotten.

They have been on top-level for many years scoring goals after goals and winning a lot of awards as well.

Their time in the 21st century can’t be forgotten, knowing how important they have been to football fans, creating joy for football lovers something I still admire, knowing it would be hard to find someone like these two players.

Lionel Messi, Barcelona former skipper, the Argentine have done a lot of impressive things in football, his ability to dribble, shoot and score beautiful goals, makes him so special.

His time at Barcelona was a wonder, even the whole camp now enjoys chanting his name during games.

Winning 7 Balon d’Or, 6 golden boots, and many more individual awards including adding a lot of trophies to his success as a footballer.

His ability to beat his man so easily score with almost all parts of his body makes him so special, many call him player of the big moment. Helping his side in difficult situations Ronaldo won’t ever be forgotten in football history. 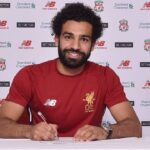 4 Reasons why Liverpool must agree to Mo

Latest Arsenal Transfer!! Arsenal and Yo