PRE-SEASON!! Mikel Arteta Arsenal’s side ran riot at Arsenal training ground in London Colney on Saturday morning with a 5-1 victory over League One side IPswich.

Two weeks ago Eddie Nketiah pen down a long-term contract with the North London side and he has begin to shoe why Arsenal were really desperate to offer him another deal.

Nketiah who wore the club’s No.14 jersey chipped in a solid three goals and also recorded a brilliant assist all inside 35 minutes into the game.

Nketiah’s first goal in the pre-season on Saturday came in just 30 seconds before going ahead to set up an assist for Sambi Lokonga to give the Gunner’s 2-0 lead, before completing his Hat-trick with another two beautiful finishes.

Bernd Leno started in goal, alongside Ben White, Cedric Soares at the back.

Meanwhile, Gunner’s youngsters Folarin Balogun also record a goal in the 5-1 victory. The Centre-forward just return from loan at Middlesbrough.

Latest Arsenal Transfer!! Arsenal and Yo 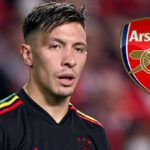