Ever since Mikel Arteta became Arsenal coach in 2020 the club has faced different situation but Arteta have been able to keep his job till date following some brilliant show by his team.

With High hope for a better 2022, fans have requested for something special from the board this year, to mark the end of some poor display from the Gunners which was so embarrassing.

Fans hope the team can maintain their recent form to secure a champions league spot ahead of next season.

ARSENAL currently stand at 4th on the leauge table below Chelsea who are in the 3rd place.

Fans expect the team to play with strong spirit and motivation like that of other Epl giant examples Man city, and Liverpool.

ARSENAL have some areas in their squad that really needs changes, sell the unfit players then replacing the with better option. 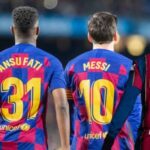 Pedri or Ansu Fati – who will be t