Ligue 1 giants, Marseille are ‘surprisingly optimistic’ they can seal a deal to re-sign French defender, William Saliba from Arsenal.

Despite signing the defender from Saint-Etienne back in 2019 for a fee of £27million, he is yet to make his competitive debut for the North London giants.

Saliba has been on a number of loan spells since then, including an initial switch back to Saint-Etienne and further stints in France with Marseille and Nice.

Most recently, the 21-year-old enjoyed his most successful loan spell, where he has managed to claim the Ligue 1 Player of the Year Award while at Marseille.

He also earned a spot in Didier Deschamps’ France team.

Now, French towering defender is back at the Gunners and has impressed during the Gunners’ pre-season games.

The 21-year-old defender has looked solid and composed at the back, and has been deemed ‘ready’ by head-coach Mikel Arteta.

‘I am really pleased to see the way he is playing, the way he has adapted to the team, the maturity that he’s shown at 21 years old, carry on doing it,’.

‘We will keep developing him, he has huge potential, he is already a top player and we have to make him even better.

‘He looked ready to me today.’

Saliba is clearly in the manager’s plans for the 2022/23 season, and his debut could come as quickly as the opening game of the new season against Crystal Palace next Friday.

However, reports earlier this week suggested that Marseille president Pablo Longoria travelled to London for talks with the 21-year-old’s agent over a prospective transfer.

And now, L’Equipe report that Ligue 1 giants, Marseille are still keeping tabs on Saliba’s situation and are ‘surprisingly optimistic’ about their chances of signing the defender again.

The Gunners have been busy in the summer, with deals secured for Gabriel Jesus, Fabio Vieira, Oleksandr Zinchenko, Marquinhos and Matt Turner.

Meanwhile, the North London giants are looking to clear out the likes of Lucas Torreira, Hector Bellerin and Berns Leno due to their unfruitful output. 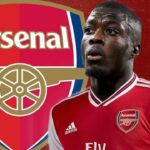 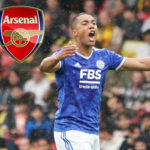